The Hardstyle Mixing & Mastering Course™ is offline. You can now learn the best mixing strategies in the EDM Mixing Guide.

Whether you’re creating epic leads, aggressive kicks or beautiful vocals, sometimes your sounds seem to have these annoying frequencies that can ruin your mix. Usually that’s due to a harsh resonating tone or background noise that causes the problem.

That’s why; let me share a quick mixing technique with you that you can use immediately to remove any bad frequencies from your sounds.

One of my loyal subscribers asked: could you do a video about advanced mixing tips, like surgical eq and things like that? Yes, I can. So, let me give you 3 easy steps to clean up your sounds from any annoying harsh frequencies.

If you also have a question you would like to get answered, just leave a comment below. Maybe I’ll pick your topic for the next post.

What are bad frequencies?

Now, what exactly are “bad” or “harsh” frequencies?

Bad frequencies are very specific tones or noises that are a bit too loud. They kind of punch through in a sound and throw off its balance or cleanness.

Bad frequencies can appear for different reasons, such as distortion side effects, weird background noises from recordings or unfortunate filtering and EQing. However, you sure as hell don’t want to start all over again to recreate your sounds, but rather fix the problem directly.

This is where surgical EQing comes in. Surgical EQing is an effective mixing technique that you can use to remove a very precise frequency range. All you need is an equalizer and the 3 simple steps from this tutorial. At the end, I will also give you a great bonus tip you may find very helpful.

Let me say upfront that prevention is always better. So, having a sound without annoying tones is superior, as you don’t need to process it any further. And no processing means no data loss.

So, if you don’t know how to make high-quality sounds, you can start with the Sound Design for Beginners guide first. Just click the link to get started.

However, life happens and nothing is perfect, so let’s just find out how to remove any bad frequencies from your sound or mix.

I’ve already prepared a perfect example that we’re going to use throughout the video attached to this post. The example is an FL Studio project with my own voice from the “How to make retro game music” tutorial.

As you may know, I’m currently residing in Asia where I do the recordings and productions exclusively on a laptop. This brings some issues such as background noises and resonating tones in the audio files. There’s one resonating tone in particular that keeps showing up and has to be removed. Hence, an excellent example for today. Watch the video to hear the sample, so you know what we’re up against.

However, you can use any instrument or sound that needs some surgical EQing. So, let’s get started.

Always start by carefully analyzing your sounds and mix. Ask yourself: is there a problem? If so, what exactly is the problem? Listen closely to identify what it is that you’re hearing.

Are you sure there are bad frequencies?

In most cases, the problem has nothing to do with a bad frequency, but rather with your mixing skills in general. For example, if you don’t know how to mix a lead with a kickdrum, they may clash. The “clashing” of these instruments may give you the impression that something is wrong.

Obviously, there is something wrong, but it has nothing to do with harsh frequency that needs to be removed. It has to do with your general mixing knowledge.

That’s why in the first book I’ve written, the EDM Mixing Guide, I talk explicitly about 12 of the most common mixing mistakes you must avoid and what to do instead. This way, your songs will immediately sound 10 times better without the need for special techniques like this. So, if you want your copy, check out that link.

So clearly, you want to make sure the problem is indeed an annoying tone and not something else. A good way to identify a problem is to take a break from your project and then come back to it after a few hours. Then, listen to it again on your speakers and headphones. And focus if you hear something annoying, like a resonating tone or a harsh noise.

But if you don’t, there’s most like no problem at all. If you do however, it’s time for step 2, which we will explore in second.

Can you hear the bad frequency?

In the example in the video, there seems to be an annoying zooming sound in the higher frequencies that messes up the vocal quality. Let’s see if you can hear it.

If you couldn’t hear it, don’t worry. You definitely will in step 2.

Once you’re aware that there’s a bad frequency messing up your sound or mix, you will have to find it. If you can’t find it, you can’t remove it. So, how do you find bad frequencies?

How to find bad frequencies?

First, open the mixer, select the concerning track and add an equalizer. For the project in the video, I have used the Fabfilter Pro Q, but you can use any equalizer you like. Then, use the equalizer to detect the frequencies that cause the problem. And this is how you can do that:

Now, try to be as exact as possible and finetune by slightly moving the band between left and right very subtly to pinpoint the loudest resonance tone. Once it really starts to penetrate your eardrums, you have found the right spot.

By the way, you can also make a sharp dip instead of a sharp spike to directly spot and eliminate the bad frequencies. It just depends on your preference. However, let’s stick with this method for now and go to step 3.

Now that you know which frequency is giving you nightmares, it’s time to do something about it. So, let’s find out how to remove it.

How to remove bad frequencies?

Keep in mind that our ears usually lie, especially after hearing loud resonating tones. That’s why it’s always a great idea to take some breaks and get some rest before doing advanced mixing work.

There you have it and it’s really that simple. The bad frequencies have now carefully been removed, and the sound has been cleaned up.

Surgical EQing with a wider band

If, however, you find that the resonating tone spreads over a wider area, you can experiment with a broader band on your equalizer. Just widen it up a little step by step to learn if the bad frequencies go away. Though, be careful. A wider band cuts out more of the original signal as well and you risk more quality loss.

Nonetheless, what if you still start to feel that something is missing around the addressed frequency area? Clearly, cutting away something always results in some data loss or quality loss. So, in order to smoothen that, let me share one final strategy.

BONUS TIP: Make up for any lost frequencies

Be your own judge!

Mind you though, there are no real guidelines to follow here. Each situation is different, so you have to be your own judge. Usually, you will be fine with a dip only, but sometimes boosting some surrounding frequencies will be very beneficial.

In the vocal sample in the video, I’ve added a 1-decibel high shelf band to bring back some higher frequencies. The effect is very mild, but noticeable if you pay close attention.

Again, not a major difference in this case, but the situation doesn’t really ask for it. Yours maybe totally different and can reap the benefits even more.

Well, you’ve made this far, so let me summarize everything for you very quickly.

That should definitely do it. Give these steps a fair try and drop your comment below to let me know how well these work for you.

Other people also need this

If they work for you, they will also work for others. That’s why I want to ask you to share this post so we can reach everyone and at the same time grow the platform. So, just click the share button right now and let’s throw it out there.

Thanks for doing that and don’t forget to grab your copy of the EDM Mixing Guide and Sound Design for Beginners guide while they’re still available. See you there and keep an eye out for the next post coming soon. 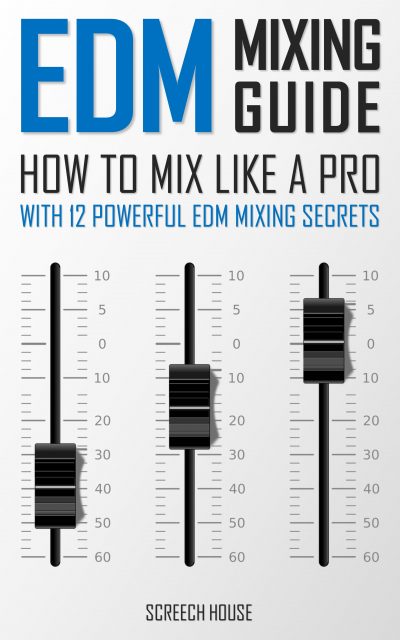 Get the EDM Mixing Guide today and learn all the secrets I use to get outstanding mixing results.